The AUA is committed to increasing awareness among elected officials and the general public on bladder health conditions. Bladder health issues impose a massive human and economic toll on Americans. However there remains a social stigma and uneasiness when discussing these issues as many patients believe that there is no medical solution to bladder conditions, or they feel too uncomfortable to bring these issues to the attention of their physician.

What You Should Know

Bladder health includes bladder cancer, incontinence and urotraumatic injuries, among others. Individuals suffering from these conditions are diverse:

What the AUA is Doing

The AUA has been a longtime leader in addressing bladder health awareness, and is currently working with the Urology Care Foundation to officially name November as Bladder Health Month in the United States. This effort is the result of years of successful advocacy aimed at improving the lives of patients suffering from bladder health conditions. The AUA has been actively working at the federal level on a resolution to accomplish our goal.

In April, Rep. Eliot Engel (NY-16) introduced House Resolution 703, a measure supporting the designation of November 2016 as National Bladder Health Month in the United States. The AUA and the Urology Care Foundation support the resolution. 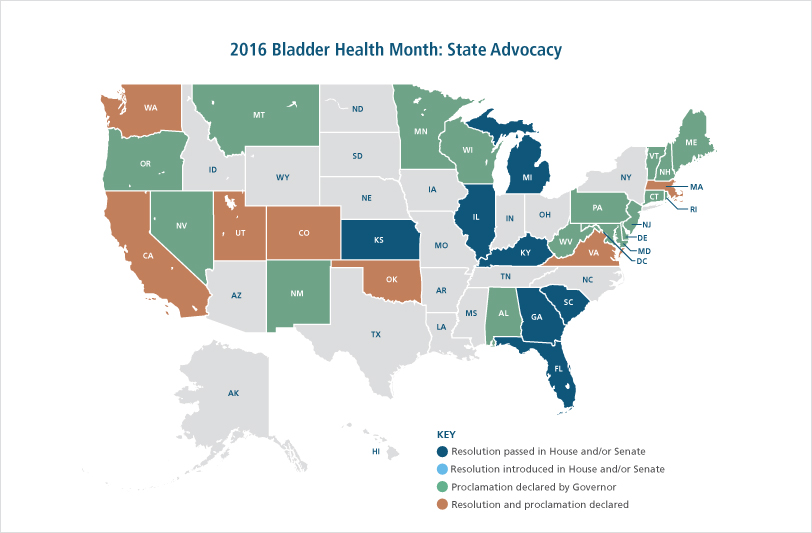 In previous years, the AUA was successful in addressing combat-related urotrauma by attaching language to the National Defense Authorization Act, which required the Department of Defense and Department of Veteran’s Affairs to create a comprehensive policy for treating service members suffering from such wounds.

The AUA has also aggressively advocated to address chronic underfunding in bladder cancer research. In 2015, the AUA was successful in adding language to the Fiscal Year 2016 Department of Defense (DoD) Appropriations Act, which listed bladder cancer as an eligible disease to compete for federal research dollars in the DoD's Peer-Reviewed Cancer Research Program. This marks the first time bladder cancer researchers will be able to apply for specific military grants under this program during its 20+ year history.

What You Can Do

Contact your state and federal elected officials and ask them to name November as Bladder Health Month.