After a wonderfully executed eleventh-hour pivot by AUA Secretary Dr. John Denstedt and the entire planning team, the AUA2021 Annual Meeting was successfully held in a virtual format. The program included an excellent array of topics pertinent to kidney transplantation (KTx) presented during plenary, podium, moderated poster and video sessions.

One of the main highlights was a report on the inaugural 7-year experience of the Voucher-based Kidney Donation Program started in 2014 (PD45-03). As a method to increase the donor pool, the program allows potential donors to donate a kidney and secure a voucher for their intended recipient, which can be redeemed in the future if needed with a kidney from a different donor. The program has seen 250 family voucher-based donations (fig. 1), which may have significantly contributed to a 3-month reduction in mean paired-exchange wait-times since 2014. There have been 6 voucher redemptions to date, all leading to successful KTx with a mean time of 88 days from time of redemption to KTx. The Voucher Program was further discussed by Dr. Jeffrey Veale during the 2021 Urologic Society for Transplantation & Renal Surgery (USTRS) meeting held during the AUA2021 Annual Meeting, resulting in some robust debate and discussion. 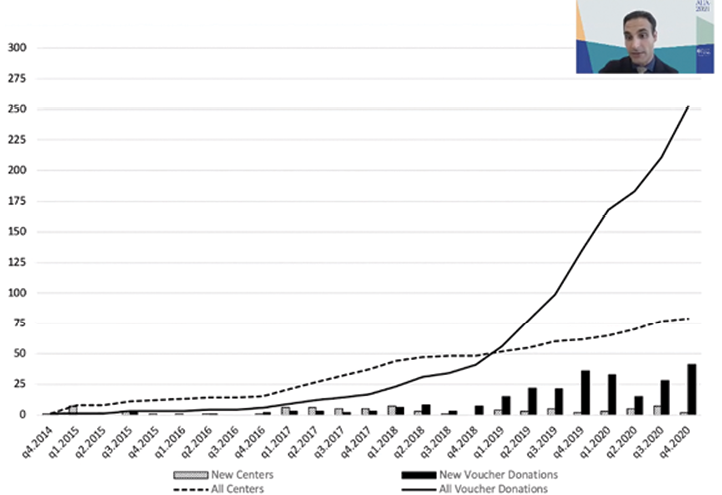 Cancer is now the leading cause of death among solid organ transplant (SOT) recipients, and given the prevalence of some genitourinary (GU) malignancies, the cross-section between uro-oncology and transplantation has become commonplace. During the podium session, a single-center retrospective cohort study including almost 11,000 SOT patients from the University of Minnesota found that recipients diagnosed with bladder cancer presented at a later stage than the general population and with higher grade disease (PD45-04; fig. 2). Conversely, those diagnosed with renal cell carcinoma (RCC) had a more indolent course, presenting with lower rates of metastatic disease and lower recurrence rates after extirpation. Data on prostate cancer outcomes among SOT patients were not presented during the meeting. Another retrospective study out of Universitario do Porto, Portugal compared oncologic outcomes among KTx and dialysis patients diagnosed with RCC and found that KTx recipients presented with lower grade disease with no signal that immunosuppression negatively impacted oncologic outcomes (PD45-07). A scoping review on the impact of immune-checkpoint inhibitors (ICI), which are revolutionizing the field of oncology, demonstrated that in addition to the overall poor outcomes of these patients, graft rejection rates were high (42%), with ICI being the most common cause (MP37-11).

Urologists have long been known as innovators and early adopters. Several abstracts focused on reducing the surgical morbidity of KTx through innovation were presented during the meeting. During the podium session, we heard about the development of a novel cold-ischemia device for use during open or robot-assisted kidney transplantation (RAKT; PD45-05). Novel devices such as these have the potential to reduce re-warming times, which may be particularly beneficial during complex cases involving long vascular anastomotic times. In the past few years, we have seen increasing adoption of RAKT. With mounting experience worldwide, we have moved from the “safety and feasibility” stage to the “optimization of outcomes” phase of RAKT, as evidenced by one of the video abstracts presented during this year’s V02 video session. The group from Fundació Puigvert demonstrated some excellent new techniques and technologies to improve surgical performance during RAKT (V02-01). Continuing to push boundaries, the Cleveland Clinic group presented their early experience with a single-port extraperitoneal approach to RAKT, and demonstrated safety and feasibility in expert hands (MP37-01).

Expanding on the focus of improving KTx surgical outcomes, a retrospective cohort study, also from the Cleveland Clinic, examining the safety and impact of implementing an early recovery after surgery (ERAS) protocol for KTx recipients found that it was associated with shorter hospital stay, reduced rate of delayed graft function (DGF) and a higher rate of graft survival at 6 months (PD45-06). While recipient body mass index (BMI) has been associated with surgical complication rates post-KTx, a group from McMaster University in Canada found that skin to external iliac vein distance (SVD) was a better predictor of surgical complications than BMI, suggesting that perhaps we can evaluate surgical risk among our KTx recipients with better granularity than BMI alone (PD45-11). The traditional teachings regarding the use of intravenous (IV) mannitol during renal transplantation surgery have come under scrutiny in recent years, both during donor and recipient operations. A single-center retrospective study found that IV mannitol during laparoscopic donor nephrectomy was not associated with improved recipient serum creatinine at 1 month, 6 months, 1 year, 2 years or 3 years post-KTx (PD45-12).

The Monday morning plenary session was a case-based discussion and included patients presenting with ureterovesical anastomotic stricture, bladder-outlet obstruction resulting in high-pressure reflux and urine leaks post-transplantation. The expert panel, comprised of Drs. John Barry, Obi Ekwenna and Jeffrey Veale, discussed the use of robot-assisted surgical techniques for ureteric reimplantation post-renal transplant, the value of considering a patient’s native ureter when urinary tract reconstruction is required and the importance of maximal drainage in the case of urine leak.

In some jurisdictions around the globe, the United States being a prime example, we are seeing an increasing number of surgical transplant teams leading multi-organ transplant programs. The need for well-trained, knowledgeable urological surgeons remains paramount to the kidney transplant patient population and the programs to which it belongs. It behooves our specialty to remain engaged in the field and continue to innovate and lead academic discovery. As we look forward to the AUA2022 Annual Meeting, I invite clinicians and researchers alike to continue to submit abstracts relating to the topic of renal transplantation and encourage all to attend the USTRS meeting held during the AUA Annual Meeting.