A 6-year-old boy was referred to our urology clinic presenting with primary nocturnal enuresis and intermittent daytime incontinence without a history of recurrent urinary tract infection (UTI). He was followed up prenatally in several tertiary centers because of bilateral hydronephrosis.

In his medical history, the parents reported that he was born by C-section at term delivery. Four days after birth he was admitted to the neonatology ward with the diagnosis of UTI. A voiding cystourethrography (VCUG) was performed at postnatal day 11 that did not reveal vesicoureteral reflux (VUR). However, by revision the imaging showed suboptimal filling phase. Two weeks later, abdominal ultrasound examination showed bilateral hydronephrosis, duplicated system and a normal bladder. At 1 month of age a renal scintigraphy (99mTc-MAG3) showed a dilated left ureter and bilateral normal concentration, perfusion and equal split renal function. Two months later, on his new ultrasound, apart from ongoing bilateral hydronephrosis, his renal findings were normal. During followup at 6 months of age, an intravenous pyelogram confirmed bilateral duplicated system with nonfunctioning upper poles. The VCUG was repeated and again VUR could not be demonstrated. Cystoscopy and ureteroscopy at 10 months of age revealed bilateral single ureteral orifices, and neither intravesical abnormalities nor distal ureteral obstruction could be demonstrated. The boy was followed up by pediatricians up to 5 years of age, with nocturnal enuresis as his only symptom. He received irregular treatment with oxybutynin chloride syrup without complaints and with stable findings. Also at that time he underwent left-sided orchidopexy because of an undescended testis. 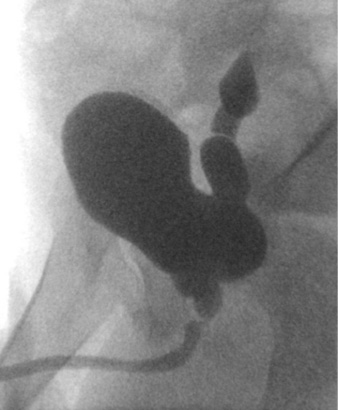 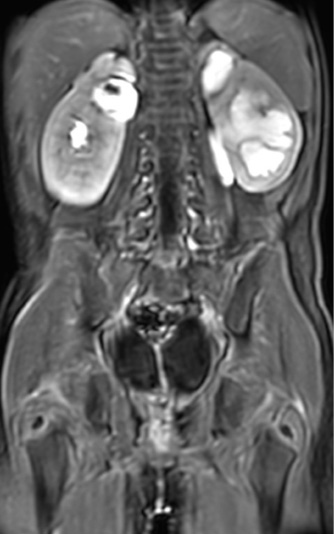 His most current renal scintigraphy (99mTc-DMSA) scan revealed a reduction of left renal split function from 50% to 43.5% additional to bilateral hypoactive 1/3 upper zone. The VCUG showed left-sided grade 4 VUR (fig. 1), a mild dilatation of the prostatic urethra and a tiny indentation with lack of contrast in the posterior urethra. On urodynamic evaluation, the bladder capacity was 275 ml (expected capacity 210 ml) and neither detrusor overactivity nor incontinence was seen. Maximum flow rate was 12 ml/second, and there was no post-void residual urine. Magnetic resonance imaging urography (MRU) showed a bilateral hydronephrosis of the upper tract with bilateral duplex collecting system and pelvic ureteral fusion in both sides. Both upper poles were atrophic. In the left kidney a thinning of the parenchyma was also noticed in interpolar and lower pole zones (fig. 2). With the suspicion of posterior urethral valves (PUVs), a urethrocystoscopy was performed. The bladder had a normal aspect with a single ureter orifice in each side. Both ureteral orifices were slightly medialized and the trigonal bar was absent. By retrograde urethral exploration a clear asymmetry of the posterior urethra at the level of the Veru Montanum was seen compatible with type III posterior urethra valve. The obstructive character of this valve was confirmed when Credé maneuver was performed with full bladder. The PUV was fulgurated with Holmium laser (0.6 J/6 Hz/3.6 W). The left posterior urethra was normal and widely open during Credé maneuver or retrograde exploration.

PUVs are the most common cause of lower urinary tract obstruction in live male births, of which 50% progress within 10 years to chronic kidney disease.1,2 Most cases are diagnosed on antenatal ultrasound or at birth, when male newborns are evaluated for prenatal hydronephrosis, or during early childhood, but rarely during adolescence or adulthood.3 PUVs are often associated with other urinary tract abnormalities such as in the present case (undescended testis—duplicate system).4 PUVs represent a spectrum of disease severity. Boys who present later in life with the abnormality are generally thought to have a more normal urinary tract. However, those patients who present primarily with voiding complaints are usually severe cases with complex evolution and they should undergo the most thorough and comprehensive evaluation that includes VCUG as the standard test for the diagnosis of PUV.5

In contrast, milder cases of PUVs are elusive and can be overlooked easily in VCUG even if they contribute to VUR or detrusor overactivity.6 Late presenting PUVs should be considered as the differential diagnosis for children who suffer from recurrent urinary tract infection, urinary incontinence and/or obstructive symptoms.