AUA2021 Crossfire Debate: Controversies in Urology: Negative Fusion Biopsy What Did I Miss and What is the Next Step?

When a magnetic resonance imaging (MRI)-guided biopsy (MRGB) returns negative or with only a Grade Group (GG) I finding, the search for a clinically-significant prostate cancer (csPCa) may not be over. Has a cancer been missed? Further steps for the patient may include repeat targeted biopsy, entry into active surveillance (in the case of GG1 tumor), repeat MRI with or without repeat biopsy at some point in the future or reassurance and observation. Next steps are dependent on the original MRI findings, prostate specific antigen (PSA) density, operator confidence in biopsy accuracy and clinical suspicion aside from the MRI.

Regarding the MRI findings, 2 possibilities exist: either a target is present or it isn’t. If no lesion is present on MRI, biopsy may be avoided altogether if clinical suspicion remains low and other risk factors are absent (racial or genetic predisposition). If prostate palpation indicates a lesion (induration, nodule, asymmetry), biopsy should be performed regardless of MRI findings. Of special importance is PSA density, which ranks second only to MRI findings in prediction of csPCa. In a prospective trial in which men underwent biopsy even with a negative MRI (PAIREDCAP), PSA density helped differentiate those with and without csPCa. In that important study, when PSA density was >0.15, 27% of men with a negative MRI were found to have csPCa upon template biopsy of the organ.1 Data on PSA density from that study help determine level of suspicion that a csPCa may have been missed.

When an MRI visible lesion (‘target’) is present, ie a region of interest is assigned Prostate Imaging Reporting and Data System (PI-RADS®) v2 score of >3, then biopsy should follow. Biopsy results are highly dependent on the PI-RADS score, as shown in the table displaying biopsy results in nearly 3,000 patients who underwent MRGB at UCLA (University of California–Los Angeles) between 2010 and 2020. The table shows the chances of a negative MRGB failing to detect a csPCa (falsely negative). For example, a man with a PI-RADS-5 lesion on MRI (bottom row) would have only a 10% chance of a biopsy showing no csPCa (≤GG1). In the UCLA experience, most men with a PI-RADS-5 lesion and a negative biopsy have been found on repeat biopsy to have csPCa.2 Thus, a negative biopsy in a man with a PI-RADS-5 lesion would raise suspicion that a csPCa may have been missed, and repeat biopsy would at some future point be indicated.

In men whose original MRI was negative and biopsy was also negative, suspicion of cancer may persist for various clinical reasons. In such cases, it is reassuring to know that a repeat negative MRI obtained at a future time point has been shown to exclude csPCa in nearly all cases.2 Thus, with a followup negative MRI repeat biopsy can be safely avoided.

Accuracy of MRGB is dependent on co-registration of ultrasound and MRI images in the fusion device. Mis-registration may account for falsely negative findings, as shown in figure 1. In figure 1, an anterior lesion is shown to be mis-registered, caused by inaccurate contouring of the prostate outline. Even with accurate contouring by experienced users, co-registration error averages 3 mm. For this reason, we perform combination targeted and systematic sampling in all patients at their first biopsy session. And in particular, we sample the peri-lesional tissue because of the known under-estimation of cancer volume by MRI (fig. 2). Of various technical issues important to accurate fusion biopsy, the scan is among the most important: bad scan, unreliable results. Technical concerns during fusion biopsy should lead to consideration of a repeat biopsy. 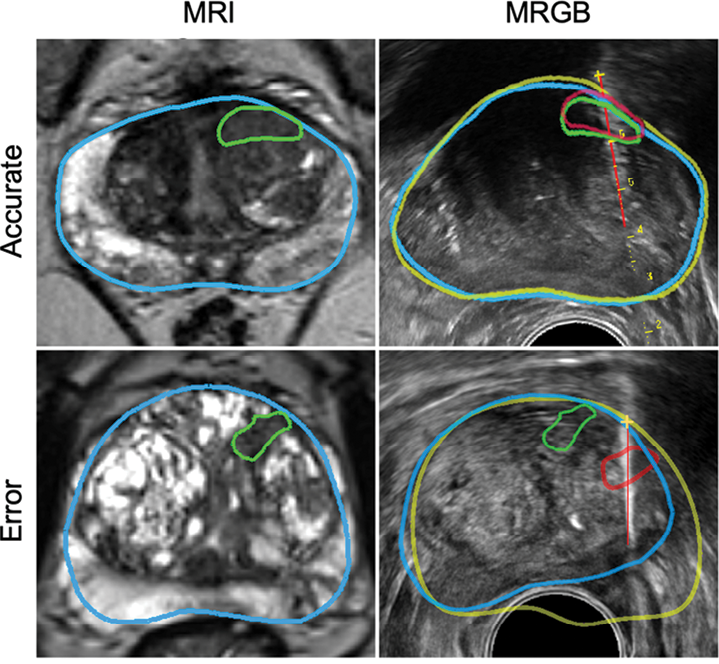 Figure 1. Image reconstructions showing example of accurate targeted biopsy (upper panels) and one in which target was missed (lower panels) during MRI-ultrasound fusion. Prostate outline shown in blue, segmented outline in yellow, actual lesion shown in green and perceived “lesion” in red. When co-registration of MRI and ultrasound is true, tissue core is taken accurately from lesion (white streak with red line overlay). When co-registration is erroneous, perceived target is shifted, tissue core comes from outside region of interest and biopsy may be falsely negative. 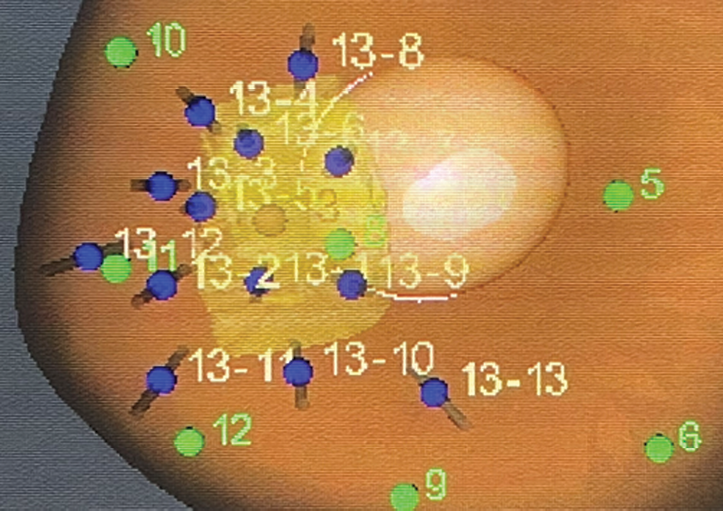 Figure 2. Example of lesional and peri-lesional biopsies. Graphic is from screen of image-fusion device showing prostate (brown), MRI-visible region of interest (yellow), template sites (green) and biopsy cores (tan with blue centers). Ultrasound probe is in center of field. Note that biopsy cores are taken both from lesion (umbra) and peri-lesional sites (penumbra).

When GG1 is found on an MRGB, a question is “could a csPCa have been missed?” The next step is enrollment in active surveillance and a year later a “confirmatory biopsy” involving repeat sampling of any MRI-visible lesion, tracked biopsy sites and if not done previously, systematic sampling (preferably with template guidance). In our experience, confirmation of GG1 by that sampling method can lead to lengthened intervals of subsequent MRI and biopsy. With followup out to 7 years, the chances of upgrading to csPCa is approximately 10% when confirmatory biopsy reveals ≤GG1.3 Thus, using the approach described, considerable reassurance can be provided that a csPCa has not been missed for men entering active surveillance.

The above measures help to determine “what’s next” when MRGB is negative or shows only GG1 tumor. The responsible urologist has several considerations–MRI findings, PSA density, clinical factors and technical considerations during biopsy–to help provide the patient reassurance or determine need for repeat study.