Robot-assisted radical prostatectomy (RARP) is the most common form of treatment for localized prostate cancer. Retzius-sparing RARP (RS-RARP) avoids dissection of retropubic space of Retzius and instead involves the dissection of the pouch of Douglas. The RS-RARP approach uses a smaller workspace, and offers less familiar landmarks when it comes to dissection of bladder neck and lateral pedicle. This makes it difficult to view the position of the ureteric orifices and median lobe of prostate after bladder neck division.1 The inverted relationship between the bladder and prostate during dissection and reconstruction of vesico-urethral anastomosis makes it challenging for the surgeon.2 Systematic reviews and meta-analyses of the literature have revealed higher positive surgical margin rates in the RS-RARP when compared with conventional RARP, especially for anterior lesions.3,4

The preservation of anterior structures has proven to be fundamental in the achievement of urinary continence. These structures include ligaments (pubic symphysis, puboprostatic ligaments and arcus tendineus) and muscles (puboperinealis, levator ani), as well as fascial and soft tissues (endopelvic and lateral prostatic fascia and detrusor apron).5 Our novel approach, named the “hood,” preserves the anterior structures and does not violate the anatomy of the pouch of Douglas (fig. 1). The Hood technique also allows various grades of nerve sparing to occur in a athermal manner and the surgeon can focus on time tested anatomical principles to achieve trifecta. Our group demonstrated excellent continence outcomes (defined as completely pad-free) in patients who underwent RARP with this technique. A week after catheter removal 21% of patients were continent, 83% after 4 weeks, 91% at 12 weeks and 95% of patients at 48 weeks without compromising surgical margin rates (positive surgical margin rates were 6% in our series).6 Figure 2 demonstrates magnetic resonance imaging annotation of hood structures in pre and post-RARP settings. 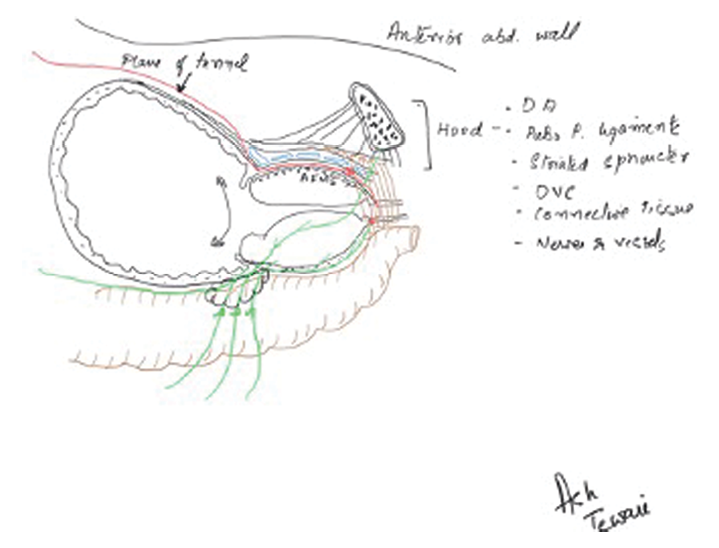 Our modified Hood approach, also called “the Tunnel,” is a periserosal, supravesical and Retzius-sparing anterior approach. It is a versatile approach that enables a tailored nerve-sparing approach through the development of an endopelvic fascia window and early release in cases of aggressive prostate cancer. Urologists are familiar with this surgical anatomy, so the technique can be easily adopted. Additionally, with the tunnel technique it is possible to clearly identify ureteral orifices and manage median lobes, avoiding the risk of ureteral injury. Likewise, the hood structures can be preserved unilaterally or bilaterally taking into account location of the tumor anterior vs posterior.

Dr. Ash Tewari (the Principal Investigator in this study and Chairman of Milton and Carroll Petrie Department of Urology at the Icahn School of Medicine at Mount Sinai) owns equity in the form of stock certificates in Promaxo, for which he serves as an advisor. Promaxo is a privately traded company which develops MRI technology with a focus on prostate cancer.