The United States Preventive Services Task Force (USPSTF) guidelines significantly altered the landscape of prostate cancer diagnosis and treatment. The last decade witnessed significant changes in prostate cancer epidemiology that evolved after the controversial grade D recommendation against PSA screening in 2012 (Fig. 1).1 Within 2 years following its release, PSA screening in men aged 50 years or older significantly decreased by approximately 20%–39%, and the annual number of prostate biopsies decreased by 21% (Fig. 2).2–4 As a result, the age-adjusted incidence of prostate cancer reached historical lows comparable to the pre-PSA era (Fig. 3)—100 cases per 100,000 men in 2014.

Figure 1. Watersheds in PSA screening in the United States during the last 2 decades. 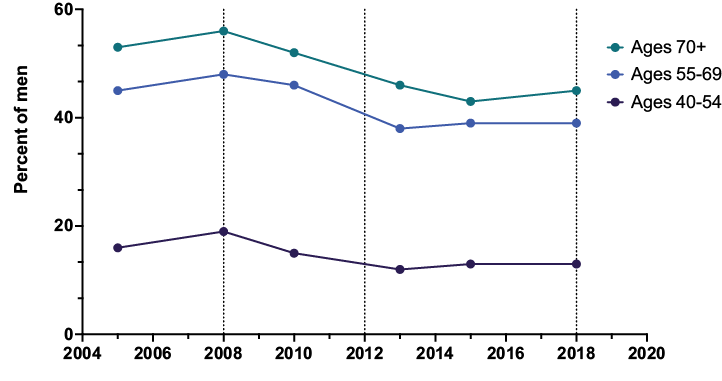 Nonetheless, it is necessary to underline the context in which the Task Force issued this statement, as overdiagnosis of prostate cancer was rampant. First, PSA testing was associated with false-positive results (of up to 80% with a PSA cutoff of 4 ng/ml), negative psychological impact, biopsy-associated complications, and significant overtreatment.5 Moreover, the 2 large PSA screening randomized trials demonstrated overtreatment of 17%–50% of men diagnosed with prostate cancer.6,7 According to recent estimates, the total number of men aged 50–84 overdiagnosed and overtreated for prostate cancer between 1986 and 2016 was up to 1.9 and 1.5 million, respectively.8

Using national representative outcomes from the SEER (Surveillance Epidemiology, and End Results) database, we discovered 2 important shifts in prostate cancer epidemiology attributable to changes in PSA screening.9 First, there was a significant decline in the incidence and treatment of Gleason Grade Group (GG)1 prostate cancer during the last decade. Between 2010 and 2018, the age-adjusted incidence rate of GG1 disease halved from 52 to 26 cases per 100,000 men, with the sharpest decline from 52 to 29 per 100,000 men occurring during 2010–2014. These changes occurred across all age groups but were more pronounced in men aged over 70 years with incidence rates declining from 189 to 98 cases per 100,000 men in 2014. After accounting for reporting delays to SEER registries, these trends coincided with the 2 USPSTF guidelines modifications in 2008 and 2012.1,10 Notably, the fact that GG1 prostate cancer is no longer the most commonly diagnosed grade at biopsy reflects a significant epidemiological shift and suggests nationwide improvements in the proper stewardship of prostate cancer screening.

Beyond the impact of screening practice changes, we explored other factors that may concurrently affect prostate cancer epidemiology. These include an increase in the prevalence of obesity, which is associated with a lower likelihood of low-grade and increased high-grade prostate cancer, and the utilization of tests in the pre-biopsy setting, such as biomarkers and prostate MRI. Nonetheless, the prevalence of obesity among men in the United States increased at a steady pace and over an extended period (approximately 20% increase during the last 2 decades), and the adoption of pre-biopsy MRI and biomarkers in the United States remains relatively low, with the highest utilization rate of 19% and 13% in 2019, respectively.15,16 These changes contrast with the rather steep decline in low-grade prostate cancer observed during the early 2010s. Similarly, PET (positron emission tomography)-CT may contribute to more detection of metastases at diagnosis because of its higher sensitivity compared to bone and CT scans. However, PET-CT scans were sparingly used during the last decade and received U.S. Food and Drug Administration approval for staging in 2020.17,18

“Certainly, the downstream consequences of this reversal in PSA screening rates will take many years to manifest.”

The demonstration of significant contamination in the control arm of the PLCO (Prostate, Colorectal, Lung, and Ovarian Cancer Screening) trial, which had shown no benefit of PSA screening, as well as the increasing rates of metastatic disease and significant declines in overtreatment,19,20 made the USPSTF issue a grade C recommendation in 2018, advocating for shared decision making for screening men aged 55–69 years.21 While this statement is more in consonance with the current evidence and other professional cancer societies, it is necessary to avoid a swing back to indiscriminate testing. Leapman et al recently demonstrated a reversal in the decline of PSA screening rates after the grade C recommendation, as evidenced by a 13% relative increase (95% CI, 1.1%–24%) among insured men during 2016–2019.22 However, these increasing trends were also seen among men aged 40–54 years and 70–89 years, who may be less likely to benefit from PSA screening. Certainly, the downstream consequences of this reversal in PSA screening rates will take many years to manifest.

“Reconciling population and individual perspectives on PSA screening remains a considerable challenge as there is a delicate balance between early detection of lethal prostate cancer and prevention of overdiagnosis and overtreatment.”

Reconciling population and individual perspectives on PSA screening remains a considerable challenge as there is a delicate balance between early detection of lethal prostate cancer and prevention of overdiagnosis and overtreatment. This is illustrated by the increase in higher grade, metastatic disease at diagnosis vs a decrease in the incidence of GG1 prostate cancer. Moving forward, implementation of PSA screening tailored to individualized patients’ risk and limited to men who would benefit, paired with a restrictive approach to biopsy and treatment, may be the key to resolving the PSA screening controversy.